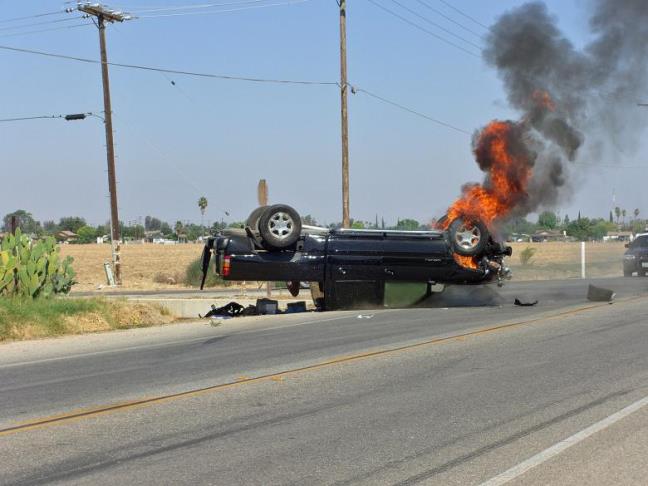 Road crashes are one of the main causes of fatalities in every country. Therefore, it is important to study the factors affecting crash severity. The purpose of this article is to investigate the factors related to the crash severities in the built-up areas and towns along the roads of East Azerbaijan province of Iran. In this study, crashes of 3 to 32 kilometers for the three highways of Tabriz-Azershahr, Tabriz-Miyaneh, Tabriz-Marand and the main roads of Tabriz-Ahar, Bostanabad-Sarab, Shabestar-Salmas and Marand-Jolfa investigated. Using data obtained from Road Maintenance and Transportation Organization, the severity of crashes considered in two modes of high intensity and low intensity. The variables such as crash type, time, month, day, type of day, day market, types of vehicles, age, gender, weather, reason of crashes and the lighting selected and the correlation of them tested by statistics and developed by binary logistic regression to predict the effect of each factor. The results of the models developed for all type of roads indicate that most of the high-intensity crashes may cause by cars collision, male driver with cars, during 16 to 20 hours on Fridays or weekends and months of December and September.

The Tabriz-Azershahr route is one of the busiest and full-accident routes in East Azerbaijan province. In this route, most of the crashes occurred in December and weekends by female drivers may be severe, and all types of vehicles may involve in severe accidents.

This rout locate along the Tabriz-Tehran freeway, which is one of the most important and busy routes. In this route, the effective factors in the  crash severity may relate to the collision of a car with car, motorcycle accidents and departure from the route with cars and trucks. Also high-intensity accidents may occurred between 0 to 4 am and 12 to 20 in rainy conditions. The age group of 15 to 44 may cause severe crashes.

The Tabriz-Marand rout is one of the international transit and tourist routes of East Azerbaijan province. The most effective time in the crash severity on this route may be 20 to 0 pm at night in March on weekends and working days from Sunday to Tuesday, which may relate to the collision of a car with car.

One of the most beautiful but dangerous routes in East Azerbaijan province, which known as the place of crash murders, is the Tabriz-Ahar route. Dangerous accidents on this route may occurred in April, September and November in rainy conditions due to non-compliance with the longitudinal distance.

One of the busiest routes with many accidents is Bostan Abad-Sarab route. One of the effective factors in the crash severity in this route is the months of the year. Most high-intensity crashes are expected to be between 4pm and 8pm on Saturdays by cars and buses.

This route is one of the almost low traffic routes in the province. High-intensity accidents may occurred on this route in November and in the age group of 45-64.

This route is one of the busiest tourist routes in East Azerbaijan province for travelers. Severe and dangerous accidents on this route may relate to the motorcycles in 16 to 0 pm in April and on weekends.

– Studies over a longer period can provide accurate information about the factors affecting crash sever.
– Some of the main and secondary roads of East Azerbaijan province have breakdowns and technical problems, so the study of the geometric characteristics of these routes and their impact can also be effective in accurately identifying crashes with high damage.
– In data collected for the present study, speed is one of the factors of total causes, while in most worldwide road crash studies, the three factors of speed, fatigue and drug or alcohol usage categorized as a separate segment (related to Driver). In this case, their role and impact can be carefully studied especially speed, which is one of the most important factors in accidents.
– Study of the impact of any disease or drug use by the driver on accidents is important. Because due to the increasing number of cardiovascular diseases in the country, the possibility of heart attacks and strokes while driving increased or some medications have a direct effect on the decision-making power and timing of the driver’s reaction or drowsiness, resulting in the possibility of high-intensity accidents.
– Considering the urbanization and the growth of cities, the study of accidents on the inner highways of metropolitan areas, which are the main arteries of transportation and the bridge between roads and suburban highways are important. The economic considerations of accidents are also necessary.

If you need to get the original article, contact us.